Cardinal Scipione Caffarelli Borghese – numen and creator of the Villa on the Pincio – was the son of the noble, but penniless Francesco Caffarelli and Ortensia Borghese, sister of Pope Paul V. The right-hand man of his uncle, the pope, and an insatiable art collector, he was not an intellectual, but a highly inquisitive man endowed with an eye and impeccable taste in art, whose interests ranged from music and botany to politics

Gian Lorenzo Bernini worked for him for many years, and this relationship led to a close acquaintance between the two.

Everything that Bernini knew about the cardinal’s character is masterfully condensed in the bust portraying him.

Bernini was a phenomenal portraitist. He first tried his hand as an adolescent, when he was an apprentice of his father, Pietro. In his portraits, Bernini is never content with representing the appearance of his subject; he wants to capture their character and soul, to infuse the stone with life. To do this, he knows that he must overcome the problem of the absence of color in the marble, whose whiteness deprives subjects of chromatic aspects that are so distinctive. But Bernini’s working of the marble is so sensitive that it manages to create tactile effects – transforming stone into sagging skin or eyebrows or silk or a badly shaved beard – and to suggest color.

The Bust of Scipione ls one of the pinnacles of Bernini’s portraiture. The sculptor believed that to capture a person truly you had to observe them in motion. Thus, also in this case he executed sketches from different angles of the cardinal talking and moving. A couple of these still exist: one in profile and the other a caricature, which shows the artist’s irreverent sense of humor, as well as the swiftness and succinctness of his execution. Rudolf Wittkower referred to Bernini’s portraits as “speaking likenesses”. This portrait captures the cardinal just as he is about to speak, with his lips barely parted and the corners of his mouth still stuck together. There is an instant of suspension while he turns his head and eyes slightly, as if attracted by something, an indication of his avid curiosity and numerous interests. The flabby flesh of his cheeks and his double chin, instead, reveal his love of good food, as well as, in general, his impulsive voracity. With his absolute ability to capture reality, Bernini scraped the marble with his rasp, and managed to transform it into the cardinal’s real skin, on which time has left its mark.

But this wonder was betrayed by the marble itself. A slight crack in the block widened to the point that it split the sculpture all around the head. Bernini repaired the damage with a wedge and a pivot hidden inside, but the fracture was still visible and the bust ruined.  Then he decided to sculpt a new one as quickly as possible: in three days, according to his son Domenico, or “fifteen nights”, as his biographer Baldinucci wrote. In any case, it was a feat, which attests once again Bernini’s ease in working marble. At first sight identical, the two versions differ in a few details: the creases in the cardinal’s mozzetta, the polish (more uniform, but less realistic in the second).

Both busts have always been displayed in the Villa. The first one used to be in the Room of the Emperors and the second in a portrait gallery on the second floor. Now they are juxtaposed in Room XIV. 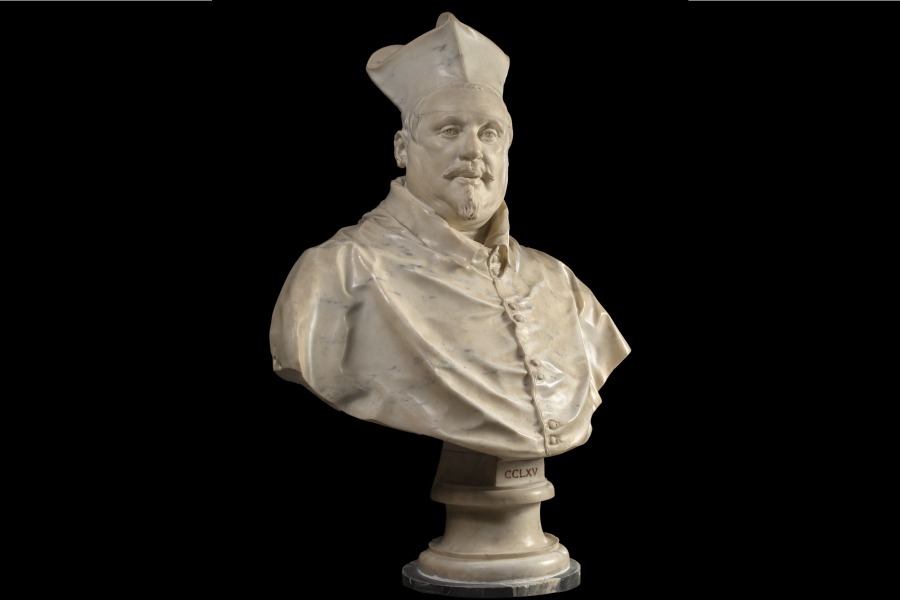