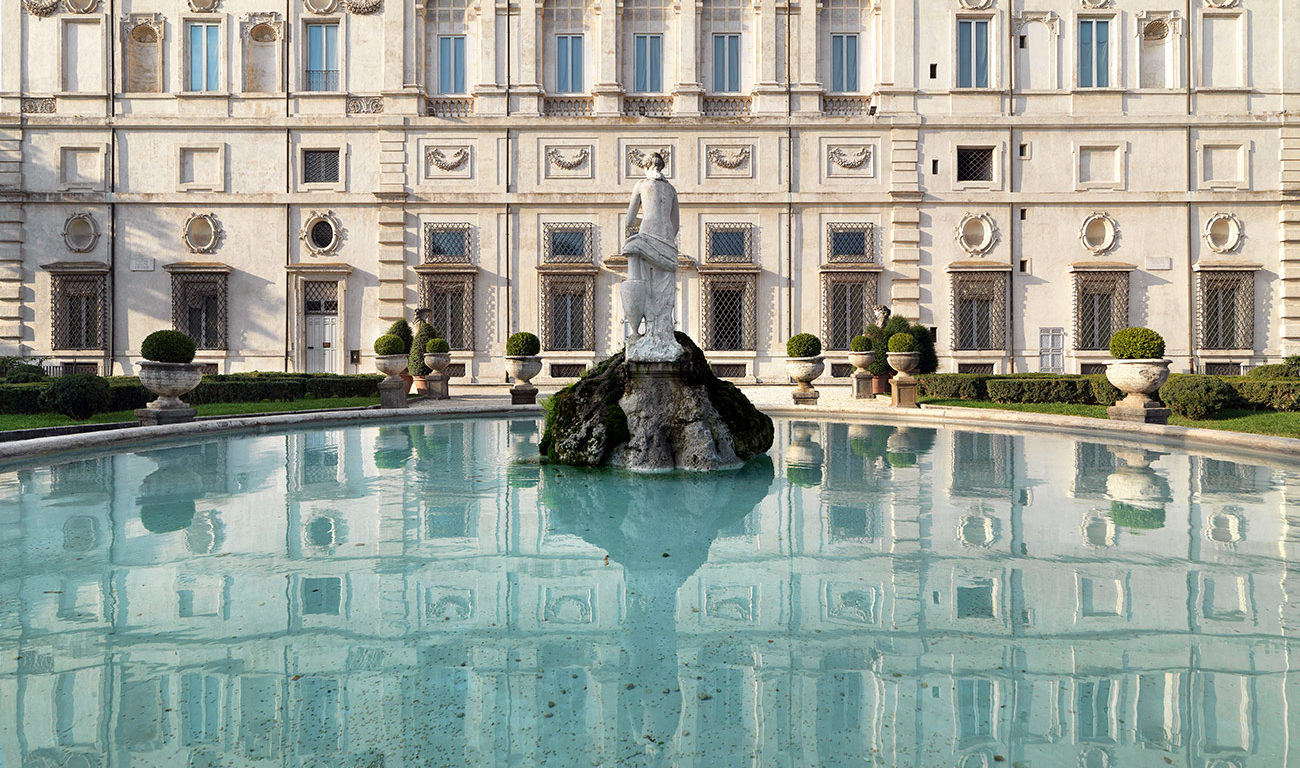 Villa Borghese "outside Porta Pinciana", within which the Galleria is located, rose at the beginning of the seventeenth century on a family property, to which other plots of land were gradually added, until an immense park was constituted. The rapid ascent in Rome of the Borghese family, which was originally from Siena, culminated in the election as pope of Camillo (1605-1621), who took the name of Paul V and began the great era of urban works and extraordinary feats of art collecting.

The unrivaled protagonist of these undertakings, as well as of the diplomatic and ceremonial activity of the papal court, was the pope’s favorite nephew, Cardinal Scipione Caffarelli Borghese (1577-1633).

Begun in 1607 and essentially directed until 1613 by Flaminio Ponzio, the construction of the Villa was completed by Giovanni Vasanzio (the Flemish Jan Van Santen) according to the architectural model of the traditional suburban villa, such as the sixteenth-century Villa Farnesina alla Lungara and the Villa Medici al Pincio. The lightness of of the building, constituted by jutting structures conneted by a portico, ensured that it was perfectly inserted in its natural environment, while the luminosity of the façade – decorated by reliefs and ancient sculptures – reproduced on the exterior the opulence of the works contained in its rooms. Other buildings which were part of the overall composition of the Villa, such as the Aviary (1617-1619), and the gardens (1620) would be completed under Vasanzio’s direction, with subsequent additions of buildings constructed at the end of the seventeenth century by Carlo Rainaldi.

Beginning in 1770, the radical renovation of the decoration of the Villa was promoted by Marcantonio IV Borghese (1730-1800) and carried out under the direction of the architect Antonio Asprucci. A team of painters, including Mariano Rossi, Domenico Corvi, Christoph Unterberger, Anton von Maron, Giuseppe Cades, Nicolò Lapiccola, and Tommaso Maria Conca, the sculptors Vincenzo Pacetti, Agostino Penna, and Tommaso Righi, and the silversmith Luigi Valadier worked on the decoration of the rooms, making the Villa a model of stylistic renewal of European significance just before the definitive establishment of Neoclassicism.

In the new organisation, Asprucci arranged the greatest masterpieces of ancient sculpture, as well as the Apollo and Daphne by Bernini, according to a new display criterion, placing them in the middle of of each room and linking the entire theme of the decoration to the iconographic nucleus of the sculptural group. The removal of the archaeological sculptures of Cardinal Scipione Borghese’s old collection, in consequence of Napoleon having forced Camillo Borghese (1775-1832) to sell them, and their nineteenth-century replacements notwithstanding, the decoration of the rooms still reflects the criteria of the display created by Antonio Asprucci.

Room of the Emperors

Room of the Bacchantes

Starting from January 10, to access the Galleria Borghese it will be necessary to show the Super Green Pass.
For more information